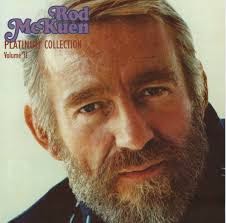 I cried when I heard the news about Rod McKuen’s death. (Only briefly, because I was in a marketing meeting and the response when I gasped and said, “Rod McKuen died!” was, “Who’s Rod McKuen?” At that moment, I stifled my tears and questioned the company I am keeping. It’s hard for me to imagine anyone not knowing who Rod McKuen is, but there’s a link at the end of this that will enlighten you if you don’t.) For the moment, though, I want to talk about this man’s impact on my life.

Robert Louis Stevenson was the first poet I loved; Rod McKuen was the second. I was 12 and just beginning to discover the world beyond my small, central Florida hometown when my sister came home from college with Rod’s books and records. As the Viet Nam war and the civil rights movement raged on, as Martin Luther King and Bobby Kennedy were murdered, as people everywhere were protesting everything, I slipped into adolescence on the wings of the gentle words of this Oakland-born poet who wrote about love and summer mornings, love and yellow buses, love and loneliness, love and snowfall, love and God, and love. Why my mother failed to intervene is a mystery; many of Rod’s poems fell far outside the parameters of my strict Southern Baptist upbringing. Perhaps she, like so many, dismissed poetry as unworthy of notice. Or perhaps she, like so many, never realized the impact that year would have on all our lives. In any case, as those months of ugliness, unrest, and uncertainty permeated the pages of history, I immersed myself in McKuen’s world of keen observations, pensive reflections, probing questions, and insightful assessments.

Along the way, I fell deeper in love with poetry. Since discovering Robert Louis Stevenson’s A Child’s Garden of Verses (every child should own this book) soon after learning to read, I already loved the genre. But McKuen’s simple, honest words took me to a new level of appreciation and inspired me to view the world in a different way—in my opinion, the most important thing poetry can do. From the beginning, the academic world dismissed McKuen as a lightweight, but the real world wholeheartedly embraced him. In the course of his career, the man sold more than 100 million records and 60 million books. His songs have been recorded by artists ranging from Johnny Cash to Madonna, and he earned a Grammy, two Oscar nominations, and a Pulitzer nomination. Some things never change: the academic world still largely dismisses any poet who is commercially successful. I’m not sure why it’s such a sin to have one’s poems adored by the masses; seems to me that’s the ultimate indication of being a successful poet.

In the end, my experience with McKuen’s poetry formed the foundation of my belief that poetry is most valuable when it readily resonates and is easily understood. That conviction is what led me to launch my annual April “Poetry Parade” many years later, which led to the birth of www.YourDailyPoem.com in 2009, a venture currently celebrating its fifth year with a subscription list that continues to grow daily. I actually exchanged emails with my poetic hero in 2003 when I hesitatingly asked permission—and Rod generously granted it—to share one of his poems in that year’s Poetry Parade. (I still have that email in my inbox; I will leave the task of deleting it to my children, when I am dead and gone.)

Not everything Shakespeare or Yeats or Frost wrote was brilliant; not everything Rod McKuen wrote was brilliant, either. But much of what he created touched the hearts of millions and for some, such as I, those words had a lasting impact. I am grateful for his talent and legacy, grateful to have been the recipient of my sister’s literary hand-me-downs, grateful that my introduction to love and its sundry pleasures came packaged in such tenderness. I will miss you, Rod McKuen, but I know the poets’ corner in heaven is definitely a bit brighter today.