I was four years old when Hurricane Donna hit Hardee County, Florida in 1960. Let me save you the trouble of doing the math by telling you that, even thoug

h it’s been fifty years, I still vividly remember the experience—and I mean remember as in I can still play back specific moments in my head like a black and white movie. Black and white—or, more accurately, grey—because that’s all there is when a storm of that intensity comes to town: roiling grey skies . . . sheets of incessant grey rain . . . suffocating grey shadows in homes and offices where power failures make time and humidity unbearable . . . nothing but swirling, smothering, sopping, seething grey. It was like Mother Nature swept in and sucked out all the color in the world.

Wauchula in 1960 was right up there with Mayfield and Mayberry—a wonderful small town full of gracious homes, manicured yards, a friendly and flourishing downtown, and a thriving agricultural industry based on cattle and citrus groves. Ours was a close knit community of good citizens, good neighbors, and strong faith. Enter Donna, a storm that raged for nine days--September 2 to September 11—as she churned through the Atlantic, demolished Florida, then ripped on up the U.S. East Coast. To date, Donna is the only storm 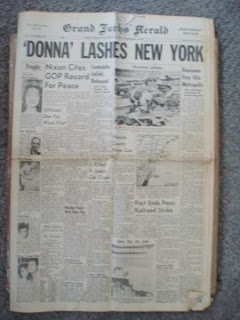 on record to generate hurricane-force winds from Florida to New England. A Category 3 storm for most of her duration, at one point, Donna actually grew into a Category 5. Because of her devastating impact (nearly $3 billion damage, in today’s dollars) and high mortality cost (364 people died), the National Hurricane Center declared that the name Donna would never again be used for an Atlantic storm.

To maintain my goal of blogging this year about “ten” things, I tried hard to come up with ten memories of Hurricane Donna, but I could only manage the four I’ve hung onto all these years. Perhaps some of you readers can finish off the list.

1. I remember sitting behind the screen of our front door watching the wind lift the right corner of the roof off the house across the street, over and over again. (The Lambert’s house.)
2. I remember watching a palm tree that stood in the corner of the Lambert’s yard blow over and crash into the roof.
3. I remember opening the garage door and walking out to stand in our driveway as the eye of the storm passed over. It was absolutely silent and I was mystified at how there could have been such turmoil and then such stillness.
4. I remember my mother cooking on a campstove.

Tragically, any mercy shown to my hometown in the years since Hurricane Donna came to a too-bizarre-to-seem-real end in the summer of 2004 when three hurricanes 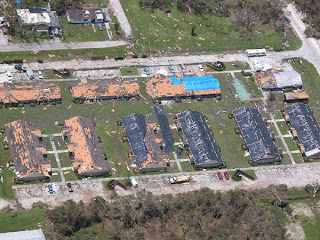 ravaged Hardee County back to back in a span of six weeks. Buildings that had stood for generations were destroyed, lives and livelihoods were swept away, there was no power for more than a week. Seven years later, the good people of Hardee County are still trying to recover; I'm not sure they ever will.

Thankful to be spared the wrath of Irene, I know their gratitude is accompanied by prayers for those in her path, because if you've lived through a Donna--or an Andrew, Charley, Hugo,Katrina, or Ike, you never forget.