I wrote recently, on another blog, that despite my best efforts, I'm starting to feel like a literary dinosaur, or maybe like a forty-year-old size 10 feels in Hollywood. Why? Because the world of books as I know it is changing.

My hat is off to Stephanie Meyer and J. K. Rowling but, frankly, I don't have any interest in reading OR writing about witches or vampires. I like to read and write about normal people with normal lifestyles. (Well, actually, I like to read and write about Southern people with Southern lifestyles which, to some, is weirder than vampires, but that's only if you didn't grow up eating grits and collards. Not together, mind you; that would be weird.) I appreciate an old Star Trek episode as much as anyone, but when it comes to literature, I like my plots to revolve around familiar things and my characters to come from Planet Earth. (Okay, I admit that Douglas Adams did lure me into paranormal places and I enjoyed it, so I get points for being a little flexible.)

Furthermore, I do not want to cozy up with a Kindle; I want to curl up with a book. I get at least one e-mail a day from Amazon telling me how wonderful the Kindle is. Maybe so, but I'm not interested. I like my books to come with pages and covers and pictures and blurbs that help me decide if I'm going to invest myself in that story or not. I like to walk by and touch old favorites on my bookshelves and remember the first time I read them, or how significant they've been in my life. Some of those books I loved as a child wound up in the hands of my children and I am eagerly and carefully preserving them for my grandchildren; what joy!

In my wildest dreams, I can't envision a world with no books. Is it possible to have the same relationship with a cold, hard, soulless techno-toy as one has with a beautiful first edition? I think not. Are turned-down corners and beautiful bookmarks destined to go the way of the formal dining room: fondly remembered but rarely used? One of the sillier justifications I keep hearing for the Kindle is that it can store text for up to a thousand books. Since the average person reads fewer than four books a year, that "benefit" seems a tad overblown--kind of like calling up a 747 to go buy a gallon of milk.

It was inevitable that technology was going to impact the world of publishing, and I'm certainly enjoying some of that impact: I wouldn't think of embarking on a road trip without a book on CD, and I most assuredly would not want to go back to creating my manuscripts on a typewriter. But it makes me sad to think that some toddler in 2050 may never get to Pat the Bunny or ask Where's Spot? and find him. It makes me even sadder to think that a generation raised on shape-shifters and warlocks might dismiss Huck Finn or Anne Shirley as hopelessly dull in comparison.

I'm trying to be open-minded, but here's the bottom line: I'd take a REAL Trixie Belden over a virtual Top 10 any day of the week!
Posted by Jayne Jaudon Ferrer at 12:20 PM 3 comments:

My Llove for Llamas is Over

I am SO over my llama phase.

Once upon a time, I thought llamas were the most wonderful animals on earth. I 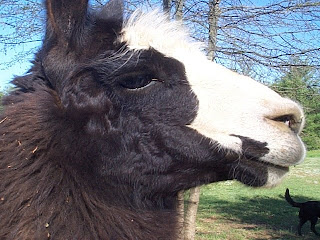 had dozens of stuffed and ceramic ones. I had llama earrings, llama clothing, and accessories made from llama wool. Then, for a "significant" birthday, I decided I would treat myself to a llama trek. Instead, I ended up BUYING a llama from the woman who owned the llama trek company. Actually, I bought two; because llamas are herd animals, she wouldn't let me have my sweet little Smore unless I took his not-so-sweet buddy, Pongo. The bell that went off in my head as Pongo looked disdainfully down his nose at me (quite a feat since, at that point, I was taller than he was!) should have been a warning.

Three sons, two dogs, and two llamas made for a great life. We live in the country where there's plenty of room to romp and play, and llamas are the world's best pets: low maintenance, curious and clever brains, great eyelashes. Though my furry little fellows had great bloodlines, I quickly discovered I did not have the patience to go the show route (for their one appearance in a local parade, it took four hours a piece to brush and groom them!), and as a busy mom, I didn't have the time to pursue breeding them. Thus Smore and Pongo were left to enjoy life as "gentleman llamas"--lounging in the pasture, entertaining neighbors, sneaking out for an occasional stroll across the yard. We found out they loved guacamole taco chips. We found out they liked Christmas carols. We found out they love to sunbathe on scorching hot days. (Go figure!)

Sweet Smore was barely in the ground before the pompous, arrogant beast I'd always suspected Pongo was revealed himself in full force. He snorted, he bucked, he charged--and, oh, yes, he spat--with great contempt and greater enthusiasm. He broke out of the pasture and headed straight for our back door, where he left a mound of "calling cards" then pranced around as if to say, "C'mon, cross that line. I dare you!" Once out of the pasture, it was almost impossible to get him back in. As long as Smore was alive, pasture breaks were no big deal; we'd lead both llamas right back in with a bucket of grain. But now, if any of us dared to leave the house while Pongo was on the loose, he'd come charging across the yard with malice in his heart, a look in his eyes declaring, "You want a piece of me? Huh? You want a piece of me?" Then he would GIVE us a piece: a hearty helping of stinky, slimy spit delivered with machine-gun force, and woe be unto whoever happened to be in his line of fire. As long as I was watching from inside the house, it was pretty darn funny to see this shaggy, 500-pound son of Satan terrorizing my 6 foot, 200+ pound guys. Not nearly so funny when I was the one running for my life--uncertain whether Pongo's goal was to kill me or claim me. I had no desire to experience either one.

For the last few months, ol' Pongo has been pretty docile. It's been really cold, and he likes cold weather, so maybe he's been in a better mood. Or 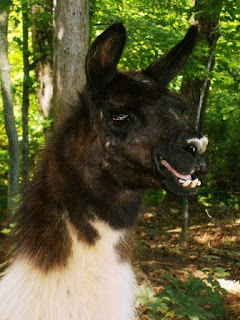 maybe he's getting old and worn out. In any case, apparently he woke up this morning and decided it was time for a reminder about who's in charge. When my husband and son and I started to leave for work, there was Pongo in the front yard, looming like a long-necked, horizontal Abominable Snowman. I swear his eyes were twinkling; I know he was grinning. Forty-five minutes, four boxes of cereal, two ropes, and a Ford pick-up later, he was back in the pasture. His heart wasn't in this escape, I could tell, because one buck, one snort, and a few half-hearted charges were all the protest he offered. I think he just needed to show a little attitude for old times' sake.

But as I stood out there shivering in the cold, waving that bucket of corn flakes (a sorry substitute for guaco taco chips, I might add) and wondering if my life should be flashing before my eyes, I thought, "Lord, it's time You call this llama home." And then, I'm sorry to say, my next thought was, "Wonder what kind of pet a miniature donkey might make?"

I am truly my own worst enemy.

AN UPDATE TO THIS POST: During his last breakout, Pongo trotted down the road to visit neighbors who, unbeknownst to me, have apparently been bringing apples and carrots to Pongo since they moved into the neighborhood a few years back. When we went to fetch him home, they confessed their fondness for our furry beast (which seemed to be mutual!) and said if we'd ever like to get rid of him, they'd love to have him. I am happy to report that Pongo the Terrible is now holding court around the corner, finally the king of his own pasture, with a new lease on life in his old age, and smothered with the attention he's always thought he deserved. Rock on, Pongo; rock on.
Posted by Jayne Jaudon Ferrer at 10:42 AM 2 comments:

Time to Swing the Bat!

WHERE did the last decade go? No matter; I won't miss it. There were some good things--watching my sons grow into men...publication of two new books and new editions of two older ones...reuniting with a couple of cherished old friends...getting to know several new ones--but there was a lot of loss and sadness in the past ten years, and a heap of struggling. I welcome 2010 with open arms and high expectations, and hope you do the same!
Here's an opportunity to get this new decade off to a great start: The Tennessee Women's Theatre Project is accepting submissions for "Women's Work," their annual festival and celebration featuring the work of women playwrights, poets, musicians, essayists, pain

ters, filmmakers, dancers, and photographers from across the country. For three weekends in May (May 7 through May 23), Women’s Work will showcase the talents of creative women at Nashville’s Z. Alexander Looby Theater; submissions are being accepted now through April 5th, but why wait? If this is the year you're determined to get back in touch with your creative self, or acknowledge the creative self you've been ignoring or trying to deny, this is a terrific way to dive in. Get out that camera, dust off your oboe, belly up to the barre, or dig out that manuscript from the bottom drawer: it's SHOWTIME! Click here for details about TWTP's big event, and check my blog often because I'll be posting other opportunities to celebrate your fabulous self as I come across them.

Because here's the deal: life is short and every day counts. Don't miss out on the joy (and there is joy in every day)because you're too busy, too shy, too modest, too broke, too embarrassed, too fat, too short, too clumsy, too disorganized, too overwhelmed, or whatever other excuse you keep using to keep you from becoming the Woman You Were Meant To Be. Grab this year by the horns and go after what you want! As somebody once said (and if you know who deserves credit for this quote, please let me know!), "You can't hit the ball if you never swing the bat," so START SWINGING!
P.S. Attention momwriters and wannabe momwriters: this just in! Katherine Hauswirth (http://www.katherinehauswirth.com/) is offering an "Hour of Solidarity" writing challenge on January 10th--a perfect opportunity to stop talking about writing and actually DO it! Sign up and get details here.

Posted by Jayne Jaudon Ferrer at 9:09 AM 2 comments: