In Asheville, the toilets worked but the towels didn't. In Minneapolis, the towels worked, but the soap didn't. In Phoenix, the soap worked, but the faucets didn't. In San Diego, the faucets worked, but the toilets didn't. And who is the idiot who designed 99% of airport bathroom stall doors to open IN instead of out? Hello? Increasingly bigger carry-on luggage to haul in the stall with you? (See previous blog rant about that.) Add a toddler, a winter coat, or pantyhose to that mix and you have the kind of frustration that leads women to commit random acts of violence--like ripping the door off the hinges or--horrors!--boycotting all but the handicapped stalls. One of the many airports I've visited in recent weeks actually had stall doors that opened OUT, and what a happy surprise that was. I wish I could remember which one, so I could give due praise.

I do recall which airports had great art, however (yes, I realize that "great," wh

en applied to art, is also a relative term), and given the fact that we are now obliged to spend many aimless hours wandering terminals in order to accommodate the "arrive 2 hours before your flight" command, a good art exhibit can make a big difference in being bored to death or reasonably entertained. Oakland currently has a fun display called "Artists as Collectors," which features everything from wedding photographs and magazines to blenders and dryer lint. Memphis has a series of close-up photographs of people that had me grinning all the way down the corrider (grinning + airport= really rare phenomenon these days). Would that Buffalo International had had something entertaining last spring when I got stuck there for six hours...but that's a whole other story.

Here's my last observation on airports: security staff on the West Coast is a lot nicer than security staff on the East Coast. Now, I have no problem taking off my shoes, peeling off my jacket, or having someone sort through all my worldly possessions (although I was a tad miffed about the seizure of my homemade peach jam), but you don't have to be rude about it. There's a man in the Buffalo airport who ought never to be allowed to work with the public, and there are a few in Tampa who could use a Dale Carnegie course as well. But the folks guarding the airways in Arizona and California are doing it with a smile, and that does not go unnoticed by those of us who remember when flying used to be fun. Let's face it: if someone's gonna pat you down, they should at least be courteous about it!
Posted by Jayne Jaudon Ferrer at 3:05 PM 1 comment:

Have Luggage, Will Pay

Have you been on a plane lately? If not, you may not know that it now costs you a minimum of $15 to tak

e a suitcase with you! I don't know about you, but I find that preposterous. Add it to the ticket price or call it a "service charge" and lop it in there with all those other mysterious charges that add an extra fifty bucks to the bottom line, but do not penalize me for taking clothes along to my destination! For Pete's sake, what's next? Surcharges for bodies over 100 pounds?
People already abuse the carry-on baggage restrictions to an unbelievable degree; I can only imagine the new levels of creativity this will bring. ("Sir, I don't believe that 300 pound garbage bag will fit in the overhead compartment.".... "It will or I'll die tryin,' girlie!") As it stands, virtually all airlines except Southwest (more on that later) are charging $15 for the first suitcase, $25 for the second, and $100 for the third. Wouldn't it make more sense to make the first one free then charge up the yin-yang for subsequent ones? I would think the idea is to reward frugal, organized travelers and sock it to those who pack everything but the kitchen sink.
So I'm already annoyed about this suitcase charge thing when I arrive at the Northwest counter, right? But I'm trying to keep my mouth shut; it's not the ticket clerk's fault. I hand him twenty dollars cash and he says, "We don't take cash. Credit card only," at which point my resolve to keep my mouth shut disintegrates and I offer up a steely smile and say, "I don't have a credit card, I have cash. You're the ones who levied the charge; do you want my money or not?" (I did have a credit card, of course, but that was

so totally not the point.) Thus ensued several minutes of inane remarks regarding the lack of cash at the gate, whether anyone had change, how they would write this up, yada yada yada, before one of the baggage handlers finally said, "Gimme that twenty; I got a five dollar bill and I'll get it back from somebody later."
On the next leg of my travels, it was interesting to note that that airline (there've been so many, I don't remember which it was) accepted only cash. Hello??? Does the word "consistency" mean anything to airline industry? Based on my observations of blank, then annoyed, expressions at the check-in counter, most people don't even know there is a charge for baggage, so it's highly unlikely they'll show up with whatever configuration of cash or plastic is needed to meet every airline's specific protocol.
It's traumatic enough to fly these days without adding convoluted baggage fees to the equation. I'm sure it's no picnic for airline employees, either, but airline executives need to get their act together and take a page from the Southwest manual. I rarely get to fly Southwest (more's the pity) since I'm in the Southeast, but they put other airlines to shame in all categories. Maybe it's just because they get to wear shorts, but Southwest employees are always warm and friendly, they're always having a good time, they make check-in easy, they make problems disappear, and they don't charge for a suitcase. Their attendants even--gasp!--crack jokes inflight. Anyone remember the days when flying used to be fun? It still is, on Southwest. 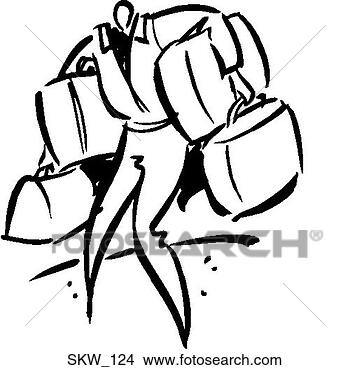 So here's my travel advisory for any of you unlucky enough to be flying soon: pack light, keep cash and credit cards at the ready, fly Southwest if you can, avoid Northwest at all costs, and beware of overhead baggage that may now kill you if it falls on your head because it's carrying two weeks' worth of clothing, accessories, toiletries, grooming appliances, and souvenirs in its overstuffed little pockets.
Oh, Wright brothers, ye hardly knew we.
Posted by Jayne Jaudon Ferrer at 2:18 PM 1 comment: