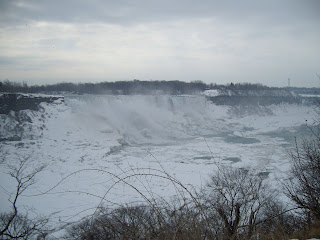 To celebrate our anniversary, my husband and I recently flew into Buffalo, New York, then spent almost a week visiting Niagara Falls, Niagara-on-the-Lake, Stoney Creek, Rockton, St. Jacobs, and just driving around in the beautiful Ontario countryside. Despite there being many feet of snow on the ground (which, Florida native that I am, I absolutely LOVED!), we had no problems at all getting around. Roads and sidewalks were clear and ice-free.

You can't comprehend the sheer power of those waterfalls (and there are two, for those of you who may not realize that) until you are standing directly in front of them. Even half-frozen, the force is phenomenal--although the seagulls seemed completely nonplussed. Lake Erie and Lake Ontario were equally impressive--in both their endless expanse and the four-foot layer of ice that covered whole sections of them! 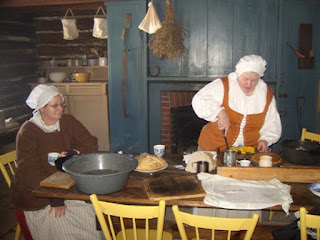 One of the best days of our trip was spent at the Maple Syrup Festival at Rockton's Westfield Heritage Village, where we learned how maple syrup has been made down through the centuries and visited early Ontario homes, churches, and businesses. Unlike most American historic villages, Westfield encourages visitors to touch and taste as well as view what life was like in the good old days. The proprietor of the general store was selling candy as fast as he could wrap it in its brown paper cones, and storyteller Pauline Grondin and costumed interpreter (and elementary school teacher) Norma Bingham shared fresh-from-the-cookstove maple delights as eagerly as tales of the family who once called that kitchen their own.

Also fascinating was learning about ice wine, the specialty dessert wine made from grapes frozen while still on the vine. Southern Ontario is the world's largest producer of this distinctive winter harvest, and wineries abound on the well-marked "Wine Route." Even bare-branched and blanketed with snow, the acres after acres of grapes, peaches, and apricots were stunning.
Even Buffalo, NY, was charming in its white winter coat. We found the downtown architecture fascinating, the residents cordial, and the sidewalk stroll (mere feet from Lake Erie!) pure joy. Not so joyful was Northwest Airlines' failure to notify us--until after we had turned in our rental car and arrived at the airport--that they cancelled our flight home and assigned us to another one--six hours later! Nice as it is, the Buffalo-Niagara Airport is a hard place to stay entertained for that long; I'm just grateful we had good books and no small children!
Posted by Jayne Jaudon Ferrer at 7:49 PM 1 comment:

March is Women's History Month, a great time to think about all the amazing women you've known. When I began work on my last book, She of the Rib, my original idea was to create a collection of tribute poems written to specific women who have impacted my life. I ended up taking the book in a different direction, but I'd still like to write those tribute poems at some point--if I could manage to distill into 30 or 40 lines the impact that Ruby Miller, Reta Barnes, Eula Tillis, and others like them have had (and continue to have) on me.

I'm a big believer in celebrating, so here's how I want you to honor Women's History Month: find a quiet place and a quiet time (yeah, I know, that's the toughest part of this assignment) and make a list of twenty women who have made a difference in your life. Teachers, family members, friends, perhaps even women you've never actually met. (Author Louisa May Alcott is high on my own list, for example; she was a huge influence on my becoming a writer.) Anyway, after you make your list, pick one person who is alive and well and write a note telling her what she's meant to you. A note, mind you--and handwritten, no less! Not a signed Hallmark card, not an e-mail. Everybody deserves to receive a note worth keeping forever, and for all you know, this might be the one. Make it worthy! Put that little piece of your heart in the mail, then find a special place to keep your List of Amazing Women so you can bring it out again next March to add another name, write another note, or just reflect again on the many wonderful women who've made you who you are today.

In the meantime, here's a list of women who, through either their intellect, ability, compassion, conviction, or courage, have made a difference for all of us. If there's a name you don't recognize, please take a moment to click on it and see what that woman's contribution was. And if you'd like post a comment about these or other amazing women to whom we need to pay tribute this month, please do!
Susan B. Anthony
Rachel Carson
Julia Child
Marie Curie
Amelia Earhart
Kathryn Hepburn
Helen Keller
Rosa Parks
Eleanor Roosevelt
Margaret Sanger
Mother Teresa
Harriet Tubman
Phillis Wheatley
Oprah Winfrey
Babe Zaharias
Posted by Jayne Jaudon Ferrer at 11:36 AM 1 comment: